We stopped by Izzys Ice cream shop today, we knew going in that they were a little on the sloppy side with dairy traces on the equipment, so Kala would be feeling very sick and very sad if she sampled some, but with her urgings I had a cone and here it is soy chocolate with an Izzy scoop (a baby scoop of another flavor ontop of the main flavor) of soy blueberry. First off I think i should have had it the other way around the blueberry really was the star of the show, so  smooth and creamy and the flavor just popped. The chocolate was good but had a lot of ice crystals in it, more than usual in their chocolate. All in all super tasty.

I don’t even know how to start this post.  You know how you bring home something new from the store with all sorts of hopes and dreams of yummy delight and then you try it and it tastes like a potting soil smoothie?  Yeah, that about sums it up.  The terror in question is the Organic Chocolate Hemp Shake from Nutiva.  The instructions say you can just mix it with some soymilk, but when I did that it was still a chalky gritty mess so I went to the blender and added in a frozen banana, which it also suggests.

The taste is bad, but the texture is even worse, it’s like gritty gel, bleh!  I can’t say it’s the worse thing I’ve ever tried, but it’s definately up there in the top 10 and I definately won’t be trying the other flavors.  I’m so glad I only bought a single serving packet!

I’ve been on such a stir fry kick lately, and today for lunch I had the urge for the yumminess yet again.  I love it because it’s one of those things you don’t really need a recipe for, you can use whatever you have in the fridge or pantry.  Today it was red bell pepper, mushrooms, onion, cilantro, green onions, mock duck, and a soy based sauce. 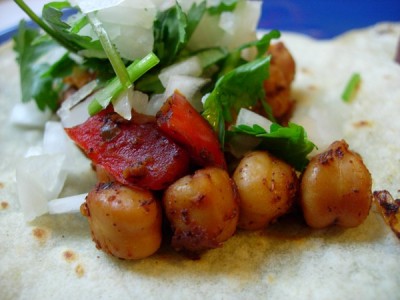 Do you have foods that are your “go-to” fast meals that you make when you are either out of food or don’t really feel like cooking?  I do, and mine are tacos.  Soft tacos, crunchy tacos, tacos made with corn tortillas, those made with flour, I love them all!  Tonight I wanted something fairly quick and easy so I made mock duck and chickpea tacos garnished with chopped onions and cilantro.  There’s not really a recipe, I mostly just use what we have in the house, tonight the veggie was red bell pepper.  Very easy and very yummy! 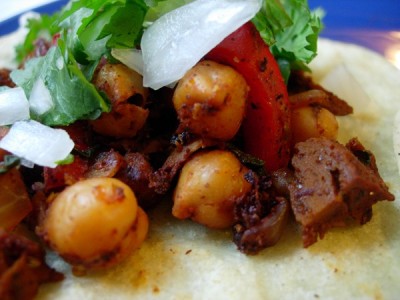 Hey, Shane and I got married last week!  There will be lots of pictures of wedding food later when I get them from the various people who were taking pictures that day.  But for now I thought I’d share some of the honeymoon food from our trip to Duluth.

First up, Burrito Union.  Super awesome and very vegan friendly, Burrito Union is a restaurant that specializes in – guess what???? – burritos, very good.  We went with the build your own burrito option and had ours stuffed with a veggie medley, Spanish rice, black beans, guacamole, jalapenos, salsa, and olives.  We also had a side of their “hot” salsa, very yummy but not hot.  Ok, it’s Minnesota hot. 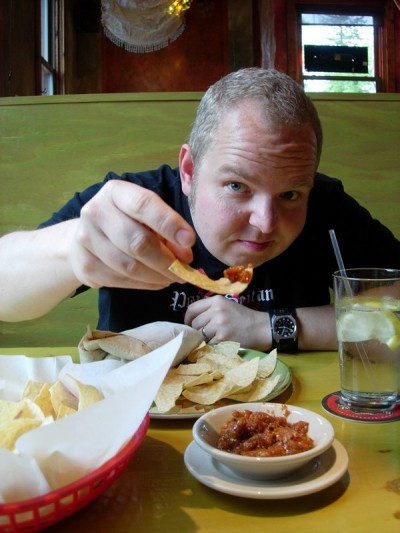 I really wish they had a Burrito Union in the twin cities, we will defiantly be back the next time we’re in Duluth.

We also had a lovely meal at Pizza Luce but I was so hungry that night that I didn’t take any good food pics.  So you’ll have to settle for me drinking water, mmmmmm water.

On our way out of town, we stopped at the Whole Foods Co-op (not to be confused with Whole Foods market) for breakfast.  We got a banana muffin that was pretty good if not a wee bit dry and we loaded up on the salad bar:

There was a tofu dish, some tasty beans and onions, garbanzo beans, olives, peppers, and sweet potato fries.  It was really good all mixed up in the box.