More soup!  Since the weather is still oppressive and horrible in Minnesota (how sad is it that it’s 17 out right not and that’s crazy warm compared to the last few days?) there has been quite a bit of soup and stew making around here.  Last night was Tuscan Vegetable Chowder, it’s a Weight Watchersrecipe and it was really tasty once I added a bunch of stuff to it.  It’s a nice hearty chowder full of spinach, carrots, tomatoes, cannellini beans, and tvp.  I added a bunch of crushed red peppers to give it a little kick and also seven or eight cloves of garlic since Shane’s got a cold (I’m big on force feeding people garlic when they’re sick, good thing Shane likes the stuff!)  I added a bit of chilli sauce on top as well for an extra bit of spice and color: 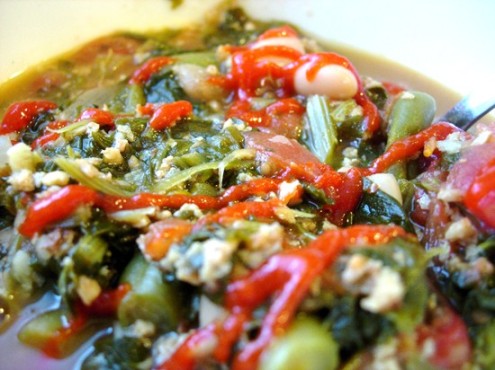